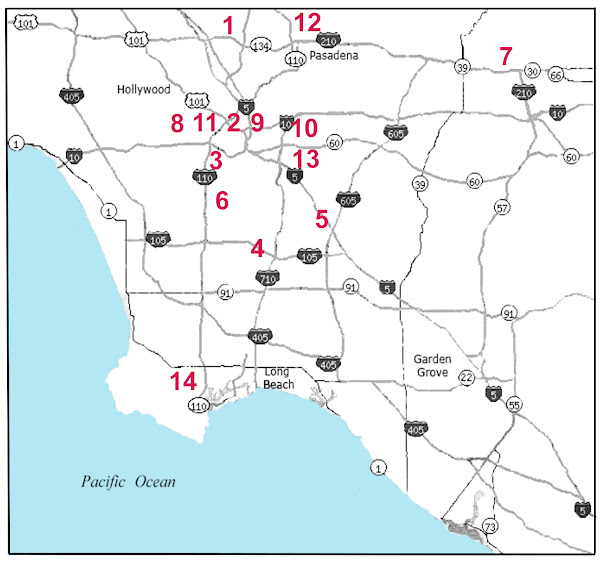 Burbank Chinatown in the City of Burbank was part of the Inland Citrus Belt. Its residences were employed by nearby orange and lemon tree growers. The community effectively came to an end in September 1893 when a mob of non-Chinese marched into the Chinatown. Fired by anti-Chinese sentiment, they drove the Chinese out of town. 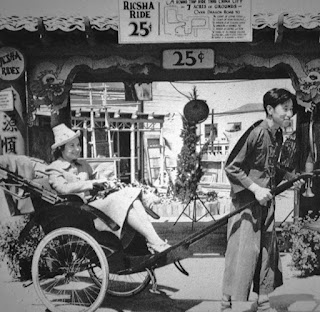 China City, in the City of Los Angeles, was bounded by Spring Street, Ord Street, Main Street, and Macy Street. It encompassed almost an entire block. Started by a group of non-Chinese, it was a business site and home for newly arrived Chinese immigrants and for some displaced by the destruction of Los Angeles Old Chinatown. It opened in 1938 and was particularly popular during World War II. It attempted to capitalize on a preconceived notion of China. This meant movie-like buildings (diminished size and "oriental" facade), rickshaw stations (photo above), terraces, temple, pagoda, restaurants and retail shops-all of which was surrounded by a "Great Wall." China City ceased to exist by the 1950s. 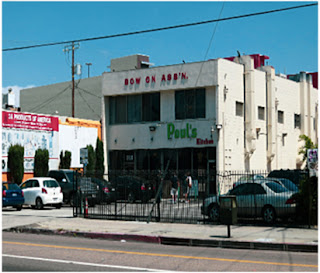 City Market Chinatown was located near the Los Angeles City Market at San Pedro Street and Ninth Street. It developed as a result of City Market itself being established in 1909, its Chinese workers being interested in living close to where they worked and uncertainty about the future of Los Angles Old Chinatown. The community contained restaurants, merchandise stores, a Congregational Church and association organizations (photo today). With the establishment of New Chinatown, City Market Chinatown began to decline in numbers.

Compton Chinatown was the result of agricultural fields extending south of the City of Los Angeles. The expansion came about with the demand for vegetables by the increasing population of Los Angeles. This meant greater employment opportunities for the Chinese. Eventually, the Chinese controlled more than 90% of produce sales in Los Angeles. Rather than a daily travel to and from Los Angeles Old Chinatown, the workers established a community near the fields. 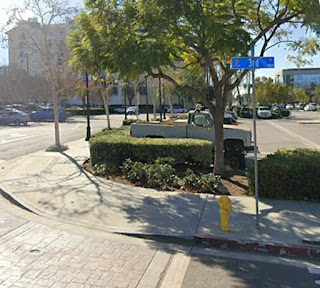 Downey Chinatown was in the town of Downey on the west side of Crawford Street between Second Street and Third Street (photo today). In 1887. It began with one laundry and one dwelling. However, all had disappeared by 1891. 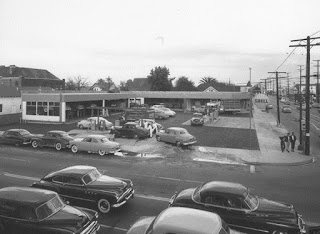 East Adams Chinatown was centered around E. Adams Boulevard and S. San Pedro Street, City of Los Angeles. It grew in the 1930s as a result of growth at City Marker. An ethnically mixed residential area, it had a Presbyterian church, Chinese school, market and gasoline station (photo above). 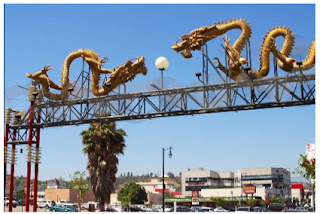 Greater Los Angeles Chinatown emerged from the coalescence of New Chinatown and China City. This was prompted in part by the end of Los Angeles Old Chinatown and the relocation into New Chinatown/China City area by others from throughout the Los Angeles area. It was the influx of immigrants of Chinese heritage in the 1970’s that completed the process. Stores and residences occupied by those of other ethnic groups were eventually given over to Chinese use. The Twin Dragon Gateway (photo today) marks the entrance and spans N. Broadway at Cesear Chavez Boulevard. 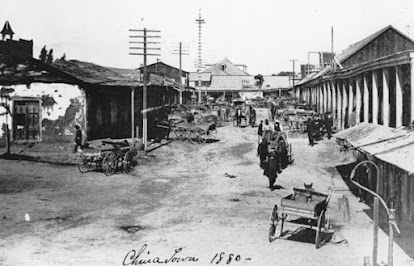 The Chinese of Los Angeles initially lived along Negro Alley next to the Plaza. A fire in 1870 caused many to relocate to an area of old vineyards next to the Los Angeles River a short distance away. An influx of Chinese into the area resulted in Los Angeles Old Chinatown. Its geographic center was Apablasa Street and Alameda Street (photo above). Subsequent growth saw the Chinese population increase to about 2,000 individuals by 1900 with the area occasionally called Chinese Quarter. It became a town within Los Angeles. It offered its Chinese residents employment opportunities and services such as a Chinese language telephone system and newspaper, medical care and recreational activities among others. By 1936, the Chinese were dispersed when the community was obliterated to make way for today's Union Station Passenger Terminal. 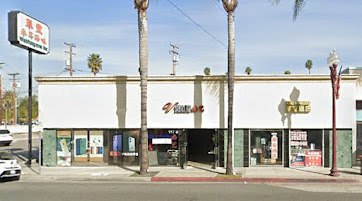 Since the 1970's, recent immigrants who settled in the town of Monterey Park were not merely sojourners, as were many during the 1800's. Rather, the new arrivals came to stay, embark on a career and raise a family. This resulted in Monterey Park becoming the first suburban Chinatown in the United States as shown by the 1986 Census count: more than 50 per cent of the population were Chinese (photo today). 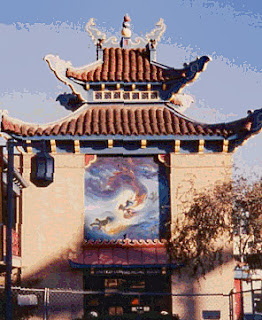 New Chinatown, 943-951 N. Broadway, City of Los Angeles, resulted from the destruction of the last buildings in Los Angeles Old Chinatown in 1936. Several members of the community decided to establish a business area in which they would own the land upon which they lived and worked. The idea took the form of the New Chinatown Corporation. Purchasing land from the Santa Fe Railroad, the corporation constructed an open and airy retail complex about one-half mile from Los Angeles Old Chinatown, New Chinatown was designed to attract the tourist trade. A gala opening held on June 25, 1938, helped the venture be an immediate success. An extension was added in the 1950's. Several street names within the development reflect important aspects of China (photo today). 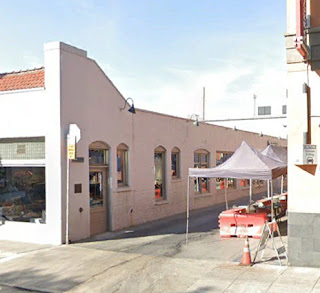 Pasadena Chinatown started around Mills Alley and W. Green Street in the City of Pasadena (photo today). Its residents were laborers in the agricultural industry in the early 1880's. By November 1885, anti-Chinese sentiment reached a point where 100 non-Chinese drove the Chinese out of the Chinatown. Some of the displaced people relocated to Raymond Hill. 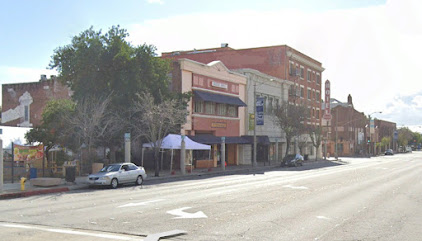 In existence by the late 1880's, Pomona Chinatown, City of Pomona, was another of the small Chinatowns associated with the Inland Citrus Belt. It was located west of N. Garey Avenue between First and Second Streets (photo today). There were two laundries, stores and a dwelling. The Chinatown was almost completely gone by the 1890s. 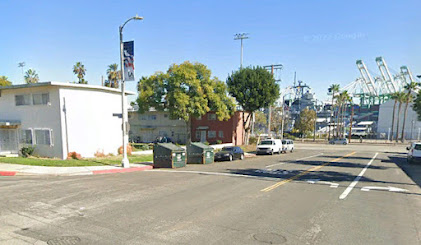 The San Pedro Chinese Chinatown in the town of San Pedro was along Beacon Street and extended from Fourth Street to Sixth Street (photo today). In May 1886, there were three laundries and one dwelling.
Home
Subscribe to: Posts (Atom)